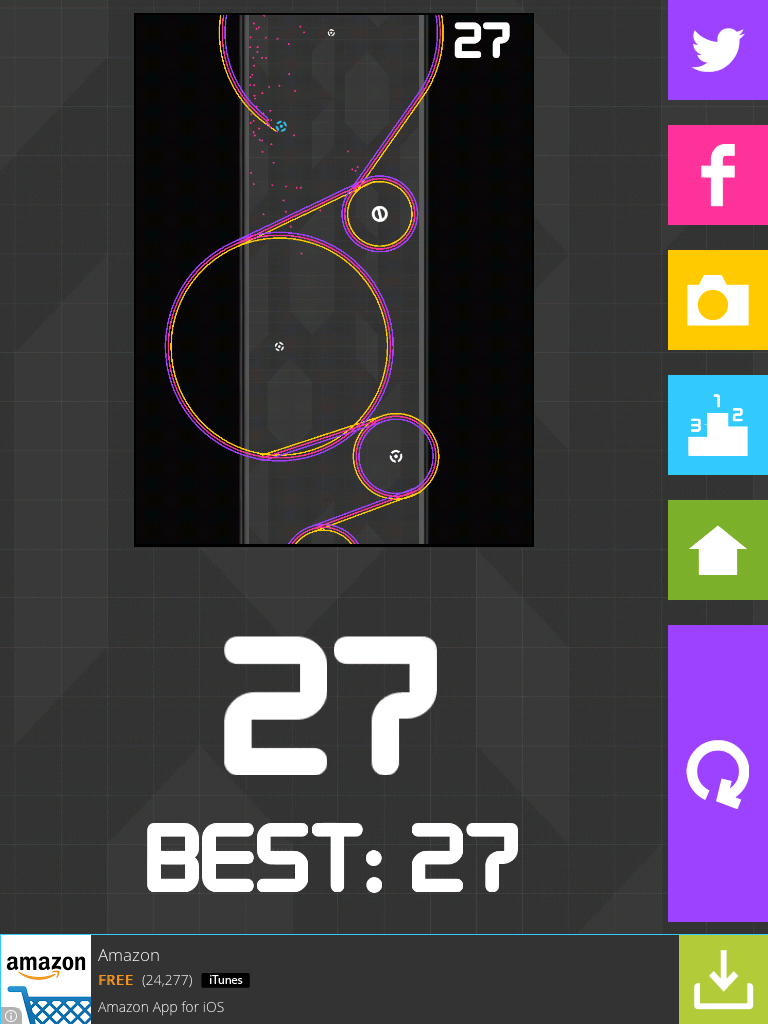 This week, I've been playing a twitch style game called One More Line. It's going to be tough to explain but I'll try!

You control a constantly moving icon which only moves forward but when you touch &amp; hold the screen, it sort of attaches itself to a nearby anchor point. This swings your icon around and around until you let go but you have to let go at just the right time to continue along a narrow path to the next anchor point.

Imagine swinging from ropes - you don't let go of one until you know you can reach the next one - well this is kinda like that except the ropes are swinging you around in circles.

The further you are away from the nearest anchor, the bigger &amp; slower the circular path becomes and it allows you to swing outside the narrow main path but you can also crash into the next anchor point if you're not careful.


There are a few ads that pop up but they aren't too annoying and the restart screen is quick to reload. believe me, you'll need that! My high score is only 27 after an hour of playing!

I enjoyed it though so I'll give One More Line an 8 out of 10. Don't play it around kids though, you'll have trouble stopping yourself swearing, I'm sure! 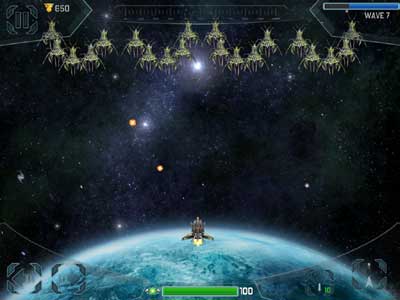 This week, I decided to go retro and take you back to the game that started my love of video games - a Space Invaders style game called Space Cadet. The graphics are obviously much improved but the basic game play is the same.Just a left/right movement and a fire button.

Your task is to shoot down the alien invaders that come in waves but unlike the original, you don't have bases to hide behind and there are bonus drops and energy bombs to collect.

The bonus drops build up your cash store so you can buy weapon upgrades, shields and more powerful special weapons.

The waves of aliens get trickier to shoot and they fly in different patterns on each level. Some have shields so you have to shoot them multiple times to remove them and there is often a much larger enemy on the last wave which has a special attack for you to survive.

I thoroughly enjoyed this one! It really is old school video arcade style gaming on your ipad so I'm going to give this a 9 out of 10. I love it and once the adrenaline gets going, you might understand why so many people used to be addicted to this style of game! 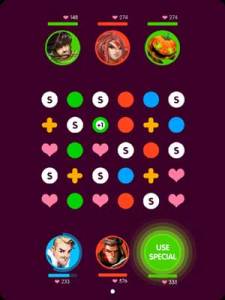 This week, I've been trying to work out how to play a game called Bandits. It's a variation on the match three theme where you have heroes who take power ups from the matches you make to attack your enemies. Each level consists of 3-5 rounds with the final round having a boss enemy who is much stronger than the previous rounds.

There are only 3 colors to match but there are also hearts for healing, plus signs for boosting the color dots and special dots which fill up your heroes special ability. It's not a simple match three though - once you start a move, you can drag that single piece all over the board to move other dots to make multiple matches but beware, you are on a timer for each move.

The graphics and music are ok but I'm struggling to work out which hero does what! My red hero only seems to attack minions which is annoying as he's my strongest hero!

Overall it's not a bad game at all, I do find it a little frustrating though so I'd give it a 6 out of 10. If you have a game you'd like to suggest, you can contact me on Twitter @NevAHAddict or leave a comment below.