This week I've found a new version of an old favorite arcade game - it's called PewPew and is an updated version of Asteroids and yes, it does have pewpew sound effects too!

The graphics are simple line elements and the basic controls are direction on the left thumb and shooting direction with the right but that really messes with my brain! In the old arcade game, you could only shoot forward of your ship so you had a direction button and a fire button - I remember hours of spinning in one place and only moving when I really had to! 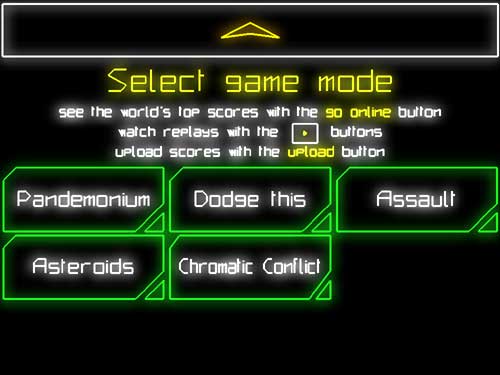 There are 4 other variations of the basic game you can play - Pandemonium, Dodge This, Assault & Chromatic Conflict - all great fun but Chromatic Conflict is my favorite - you can only kill enemies the same color as your ship & you have to get to colored bases or 'pulsars' to change your own color!

I've only just started playing it but I think this could be a great game for those 5-10 minute gaps, especially if you want an adrenaline boost. I'd give this an 8 out of 10.

"Edited to add - it's 2 weeks later and I'm still playing it a lot! I feel like a big kid again!"

I found it on the iPad App Store but PewPew is also available on Android - Yay! That's good news for me as I have an Android phone too!

This week, I've been playing Megapolis - a city building, resource management game very much like the old Sim City game I had on my Amiga 1200 years ago!

You start off with some basic buildings and resources available and lots of coins to spend but don't get too carried away! The other currency in game is the megabuck - you do earn some of these each time you level but you can also buy them with real money and as so many game developers do these days, it's the megabucks needed to buy the really cool stuff.

It took me a while to even scroll around the map out of curiosity - I'm so used to the limited play space on some games but this map is huge! The roads to the airport, baseball stadium and loads of other buildings are already in place so there is some structure already laid out for you but I don't think that will restrict your creativity too much!

With over 500 different building in the Infrastructure category and 200 in the residential buildings category, there's definitely stuff here for everyone! If you liked Sim City, I'm guessing this game might just fill a gap on your phone or ipad and even better, Megapolis is available for Android too!

Until next time - have fun! 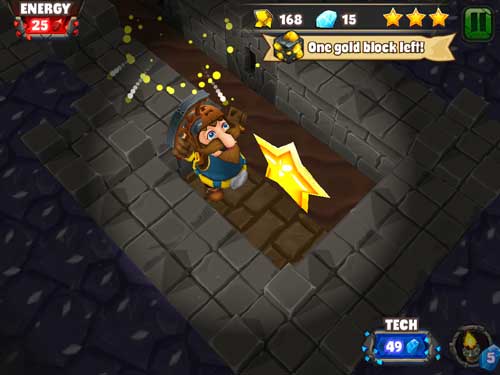 This week, I've been playing a game called Dwarven Den. It's a puzzle adventure game, set in a lost buried city. You are a dwarf, destined to dig out the treasures and rescue lost citizens.

You start with 3 lives and a set amount of energy and tech points but you use at least 1 energy to dig each block out. You navigate the maze of buried tunnels and sometimes you find extra energy (red) or tech (blue) nodes.

The tech nodes let you use lights to expand the dark areas or place bombs & traps to blow up the spiders or mummies that are trying to stop you.

There are treasure chests to find and gold blocks to dig up too. You can also forge better items by combining two of the same - they increase your visibility, slow monsters or increase your gold & tech rewards.

Each level has a specific challenge - dig all the gold (like these screenshots) or to find a missing person perhaps. Luckily there's no timer on the levels so you can take your time to work things out and there are loads of levels to play through. If you need some extra gold to buy an upgrade, you can go back and do some easier levels very quickly.

I'm really enjoying it and for someone who likes puzzles, it's a pretty good game. It's one of my favorites so far & I give it a 9 out of 10.

First off, it was Nonmail then Rez of EGP who started talking about Titanfall and slowly but surely, Cold got sucked in too. I resisted as long as I could but when I saw that Origin were doing a special 48 hour free pass weekend, I thought I'd surprise Cold by joining him in game.

I've played Call of Duty with my nephew on a console many years ago and I sucked at it so I didn't think I'd enjoy Titanfall either, hence my resistance but much to my surprise, I'm actually enjoying it!

The tutorial is pretty comprehensive for the types of moves you can make and things like wall running and double jumping are all covered, as is control of your Titan. That doesn't make it any easier when you play your first match though! Running at a wall and sticking to it long enough to run along the side of a building onto the roof of the next building is great fun and so is leaping off and landing fairly gently with the aid of your rocket pack to land. As someone who used to fall off random edges in WoW, a rocket pack is a great bonus!

Initially you go through a series of scenarios in Campaign mode - these are proper matches but varied to give you a taste of the different types of matches. Attrition is kill as many opponents as possible faster than they kill your team whilst Hardpoint Domination involves three bases you need to secure and hold - much like Warsong Gulch in WoW. 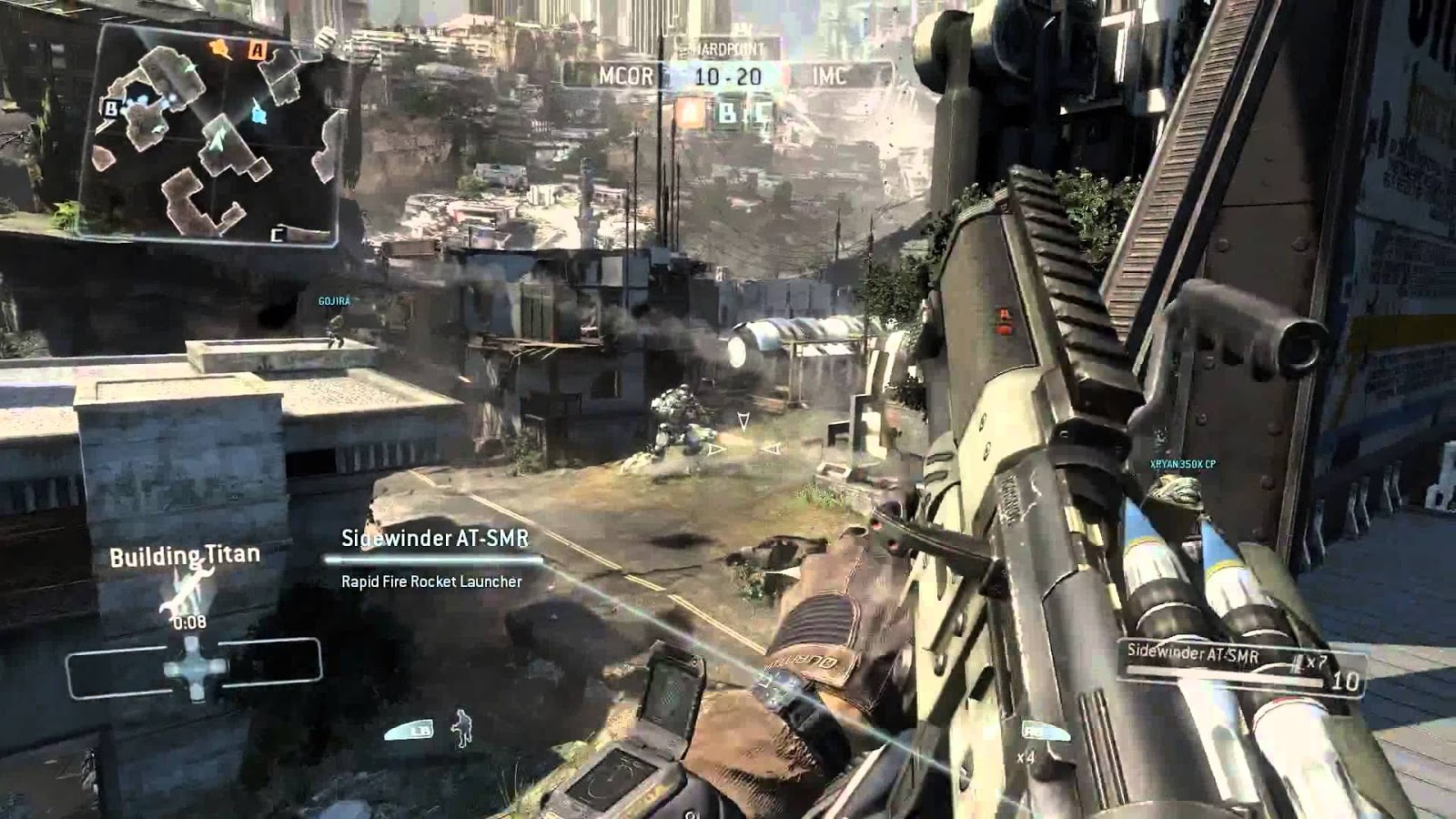 Once you are through both versions of the campaign mode, the multiplayer options open up, allowing you to play which of the Campaign scenarios you chose or to focus on one style of match. In addition to Attrition and Hardpoint Domination, there is Last Titan Standing, Pilot Hunt and Capture The Flag types too. I haven't tried any of those yet, I'm still shooting at computer driven grunts and spectres whilst feeding the opposing team with Pilot kills (me!).

The landscapes are, to me anyway, typically futuristic space type scenes - from seemingly dusty alien worlds to space stations and futuristic cities in decay - lots of nooks and crannies to hide in as a sniper or derelict buildings to drop through and surprise opponents when you land on top of them!

Not having played any other First Person Shooter (FPS) games in recent years, I have nothing to compare Titanfall to but although it's taken a while to adjust my mindset to multiple deaths, it feels a little bit like very high graphics in a WoW battleground scenario - I hated dying all the time there too until I adjusted my thinking. Obviously you don't want to die too often but if you do, it doesn't really matter too much in the overall scheme of things.

I didn't want to play with Cold initially because I always feel so useless and like I'm letting the team down - Titanfall doesn't make me feel like that. I can't keep up with Cold even if I try so I'm in the same match and on the same team but my dying doesn't affect him - well, except for me swearing excessively on Skype of course!

I'm still not very good and I'm not sure I'll ever be more than an average player but for now, I like it enough to splash out and buy the game! I'm playing on PC as is Cold but Titanfall is available for XBox One and XBox 360 - the great thing about it for us, is that US & EU players can play together - none of this separate server nonsense we usually struggle with.

Check out my latest project
Gifts for Gamers and Geeks
Posted by Nev at 15:00 No comments: 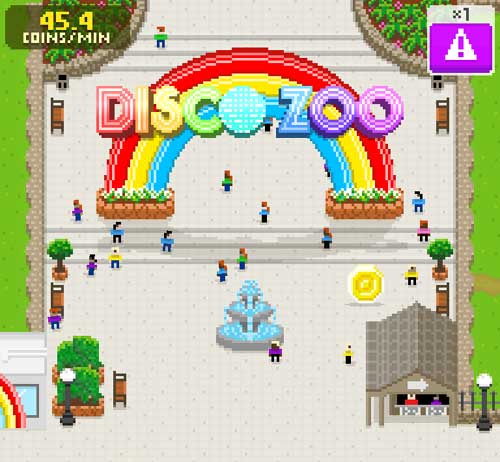 This week I downloaded a game called Disco Zoo - it has four and a half stars on the app store so I wanted to have a look. The graphics are really basic - kinda cutesy pixellated style and the play mode is also very basic.

The idea is to jump in your helicopter and go out to capture wild animals to stock your zoo. Capturing them is a battleships style event - you have a grid of boxes, 10 attempts and a hint as to how many boxes each animal needs. Click on a box and if it reveals an animal, you then click around that square to find the other segments.

You quickly run out of attempts but they have thought of that - just watch a free video ad to get 5 more free attempts. The ads really are short though so they aren't too annoying!

After you capture an animal, the builders back at the zoo will build an enclosure for it. Meanwhile the visitors are leaving tips and earning you gold. 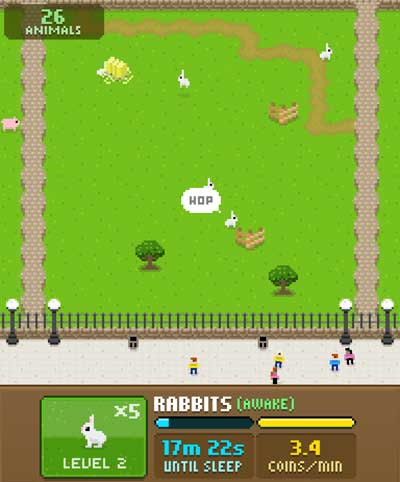 The Disco part is the stupidest part though - for the low price of 1 note you can start a disco - all the animals jump around, there's a disco ball & the streetlamps flash and you earn double the amount of coins!

It's a silly, very basic game but if you have toddlers, it might keep them amused for a few minutes at a time. Overall I'd give it a 3 out of 10 - nothing to keep me playing and definitely not going to pay for more coins or notes either!