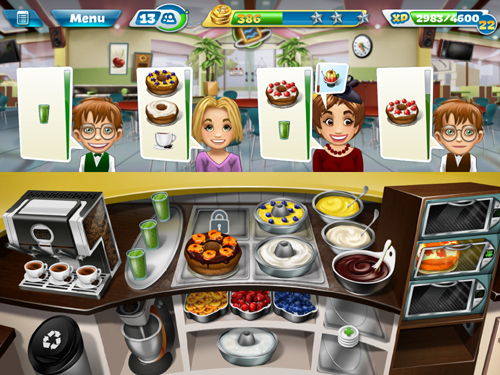 This week, I've been playing Cooking Fever. It was recommended to me but I lost the name, I'm so sorry but thank you! It's a speed based strategy game in that you have to serve various combinations of food and drink to your customers. You start off in the Fast Food Court - flipping burgers and hotdogs, fries and sodas but I've also played the bakery and am now on the Chinese Restaurant!

Each customer pays you & tips you so you use the cash to build cooking upgrades as well as restaurants upgrades like tables, tv and music systems. Each upgrade costs gold but some cost gems too. Don't spend your gems too easily at the lower levels, you will need them much more later.

I've heard criticisms that you have to spend real money to buy gems to progress but so far, I've managed not too. I built my gold up by playing levels over to hit the 3 stars and then I used the excess gold to spin the wheel at the casino! I got 25 gems that way. You get a couple of gems just by logging in each day too.

You also get gems just by leveling up but that can take a little while. I'm enjoying it, it really is quite addictive at times so I'd give it an 8 out of 10. 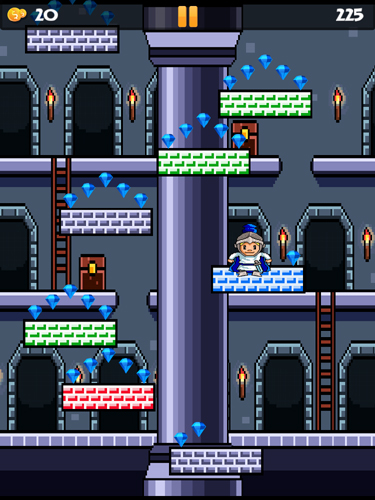 This week, I've been playing a game called Pixel Dungeon, suggested to me on Twitter by Mike Sherretz. At first glance, I thought 'great! a platform type game' but once I opened it up, it turned out to be a vertical jumping game!

You play a knight in shining armor, jumping and bouncing your way up the screen, collecting diamonds as you go. The only control you have is the tilt function for left or right but don't miss the next platform or you'll fall off the screen and have to start over! You can jump off the screen to each side but make sure there's a platform to land on or you'll die again!

Some platforms have dragons on them which you need to avoid (or you die) and some have power ups like extra bounce or speed. You can buy upgrades in the store with the in-game currency and you can also change characters too.


It's a great game for kids or for killing 5 spare minutes & the graphics are kinda cute. The one big downside for me is the adverts between each game. I wouldn't mind if they were just static pop ups to close but these aren't - they are 5, 10 and even 20 second video ads which you can't close until the timer finishes. You can pay real money to remove the adverts but I don't think the game is good enough to pay out for! 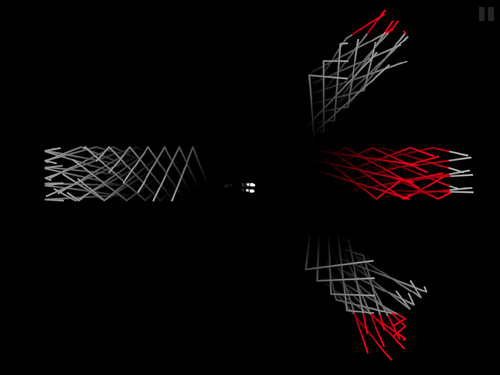 This week I've been playing a creepy puzzle game called Dark Echo. I'd suggest playing it in a dark room with headphones on if you want the full effect - echoes, footsteps, flies buzzing, squeaky doors etc.

When you first start up the game, you are presented with a black screen & two tiny footprints. As you tap the screen, you give off sound waves which show as white lines and bounce around your immediate area. They give you a guide to the shape of the room or corridor as you move around a map you can't see!

Beware though - if those sound waves turn red, then it's a danger zone or even worse, something that will chase you. There's also areas where the sound waves turn yellow - those open locked doors and gates in other parts of the map.


It's basically a maze game but you can't see more than a few steps ahead the whole time. The sound effects really do creep you out a bit though especially if you're concentrating hard & someone taps you on the shoulder!

For a simple but very effective game, I'd give Dark Echoes an 8 out of 10. 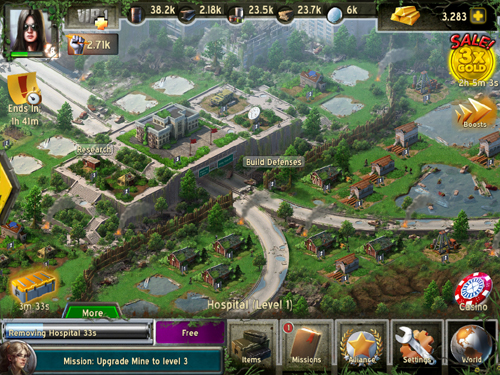 This week I've been playing a game called Empire Z. It's a tiny bit like Clash of Clans but based in a ruined city and fighting against zombies. It's much more complicated than Clash of Clans though.

There is a wider variety of resources to collect and manage - food for your troops, lumber, oil and metal for production items as well as a bunch of buildings.

You can build farms, mines and lumber mills etc outside your defences whilst inside you build the larger units like housing and hospitals. There's also a recruiting station for new troops and a cloning center to revive fallen heroes.


You also have research to do to develop various skills - in combat, defence or economics categories. The combat skill takes you all the way from recon to Zombie dozers at the top end! You will need to join an alliance to take on larger enemy units but you can set your troops off exploring too.

You don't get a choice where your city is placed on the map but you do get a free one time teleport to move it once you join an alliance. I haven't done that yet though.

I'd give it a solid 8 out of 10 - great level of detail and management that Clash of Clans just doesn't have! 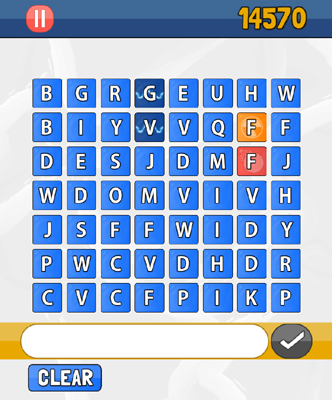 This week I've been playing a word puzzle game called Word Crush. It has two modes, endless and arcade where you're up against a timer and all you have to do is make words from the grid of letters you are given.

Once you have used the letters they drop out of the board and new ones replace them - if the word you made was good enough, you get bonuses on some of the new letters. If you manage to combine enough bonus squares, you get a combo prize which bumps your score up.

In the endless mode, there is no timer so you can take as long as you like to make some really long words. In the arcade mode, you're up against a timer - the longer the word, the further back you push the timer.

Arcade mode also has three difficulty levels, not only does the timer get quicker but you get more consonents to replace  letters so you need to make words with multiple consonents rather than vowels.

It's not the most enthralling game I've played but I do enjoy word puzzles and this game has no additional real money costs, the adverts only appear between games and it keeps my brain working fast. I'd give it a 7 out of 10.